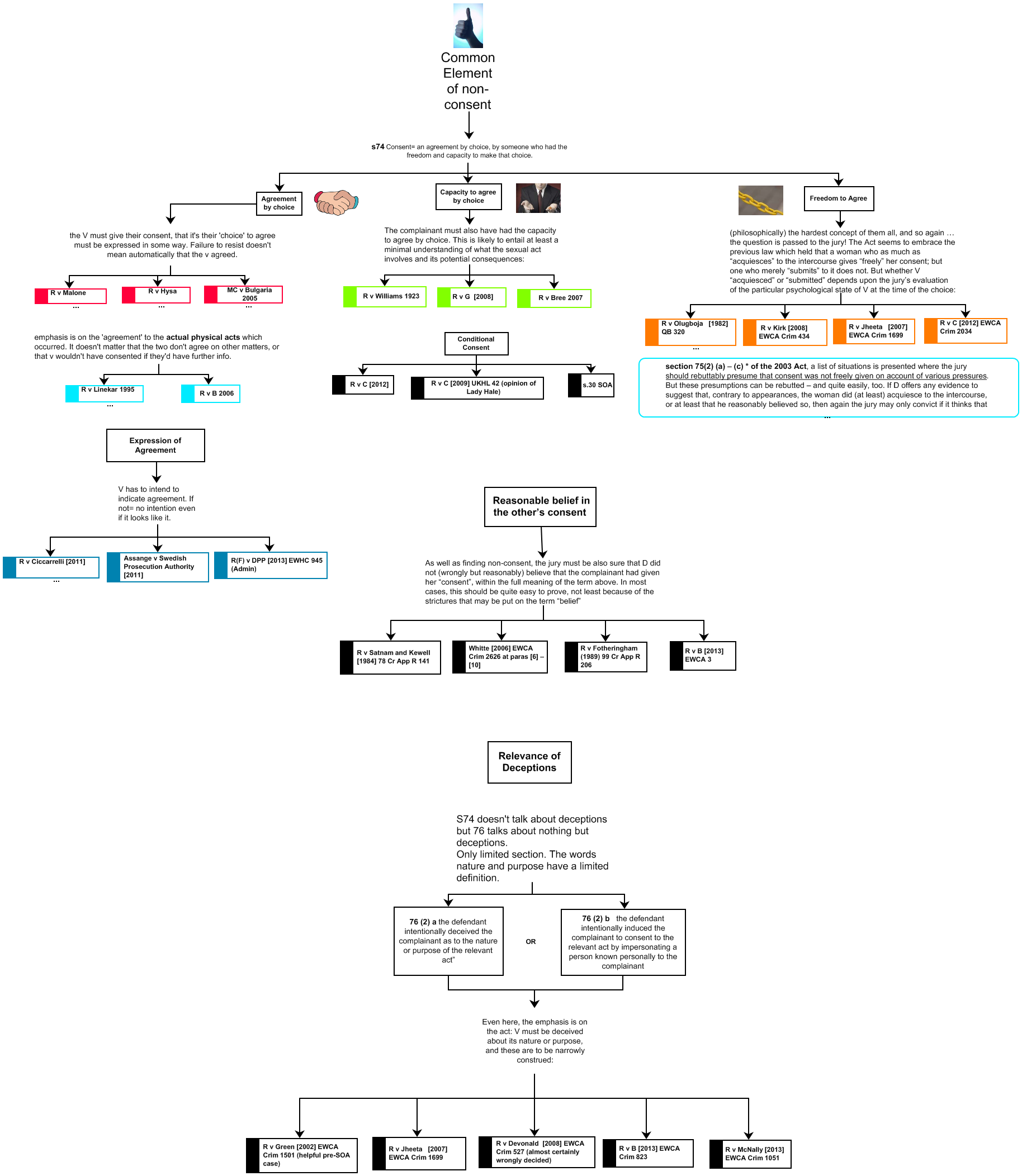 the V must give their consent, that it’s their ‘choice’ to agree must be expressed in some way. Failure to resist doesn’t mean automatically that the v agreed.

Emphasis is on the ‘agreement’ to the actual physical acts which occurred. It doesn’t matter that the two don’t agree on other matters, or that v wouldn’t have consented if they’d have further info.

V has to intend to indicate agreement. If not= no intention even if it looks like it.

Capacity to agree by choice

The complainant must also have had the capacity to agree by choice. This is likely to entail at least a minimal understanding of what the sexual act involves and its potential consequences:

(philosophically) the hardest concept of them all, and so again … the question is passed to the jury! The Act seems to embrace the previous law which held that a woman who as much as “acquiesces” to the intercourse gives “freely” her consent; but one who merely “submits” to it does not.

But whether V “acquiesced” or “submitted” depends upon the jury’s evaluation of the particular psychological state of V at the time of the choice:

section 75(2) (a) – (c) * of the 2003 Act, a list of situations is presented where the jury should rebuttably presume that consent was not freely given on account of various pressures. But these presumptions can be rebutted – and quite easily, too. If D offers any evidence to suggest that, contrary to appearances, the woman did (at least) acquiesce to the intercourse, or at least that he reasonably believed so, then again the jury may only convict if it thinks that the prosecution has proved its case beyond reasonable doubt.

As well as finding non-consent, the jury must be also sure that D did not (wrongly but reasonably) believe that the complainant had given her “consent”, within the full meaning of the term above. In most cases, this should be quite easy to prove, not least because of the strictures that may be put on the term “belief”

There is a further hurdle which may apply in cases of mistaken identity (ie, where D believes that the other is consenting because he wrongly thinks that he or she is someone else). An interesting point of construction here was raised but left unresolved in

But D may still be liable for a non-consensual offence even if he did believe that (the right person!) had given consent – if his (wrong) belief was also an “unreasonable” one. But in respect of each of the offences in s.1-4, the SOA offers only a subsection (2) by way of guidance to juries who have to decide whether any alleged mistaken belief was “reasonable”:

(2)Whether a belief is reasonable is to be determined having regard to all the circumstances, including any steps A has taken to ascertain whether B consents.

The courts have done little to offer any further guidance. We know only that if D’s mistake was caused by drink or mental disorder (including personality disorder), then it will not be reasonable, if there is nothing else which might have provided grounds for the belief:

Only limited section. The words nature and purpose have a limited definition.

Even here, the emphasis is on the act: V must be deceived about its nature or purpose, and these are to be narrowly construed:

When one reads s.74 and s.76, one might think that the two sections are supposed to be read separately. This would seem to mean that, provided that V did, with capacity, freely agree to sexual activity, then a deception about some fact or circumstance could only make any difference if it is one of the deceptions listed under s.76.

However, in Assange (above) Thomas LJ (now the Lord Chief Justice) disagreed, and held that deceptions about some very important matters relating to the sexual act might negate consent for the purposes of s.74, even if they made no difference under s.76. His Lordship said at para 88

However, it is possible to argue that this passage was obiter, and no higher court has yet needed to decide whether it is correct.

There are three R v B cases