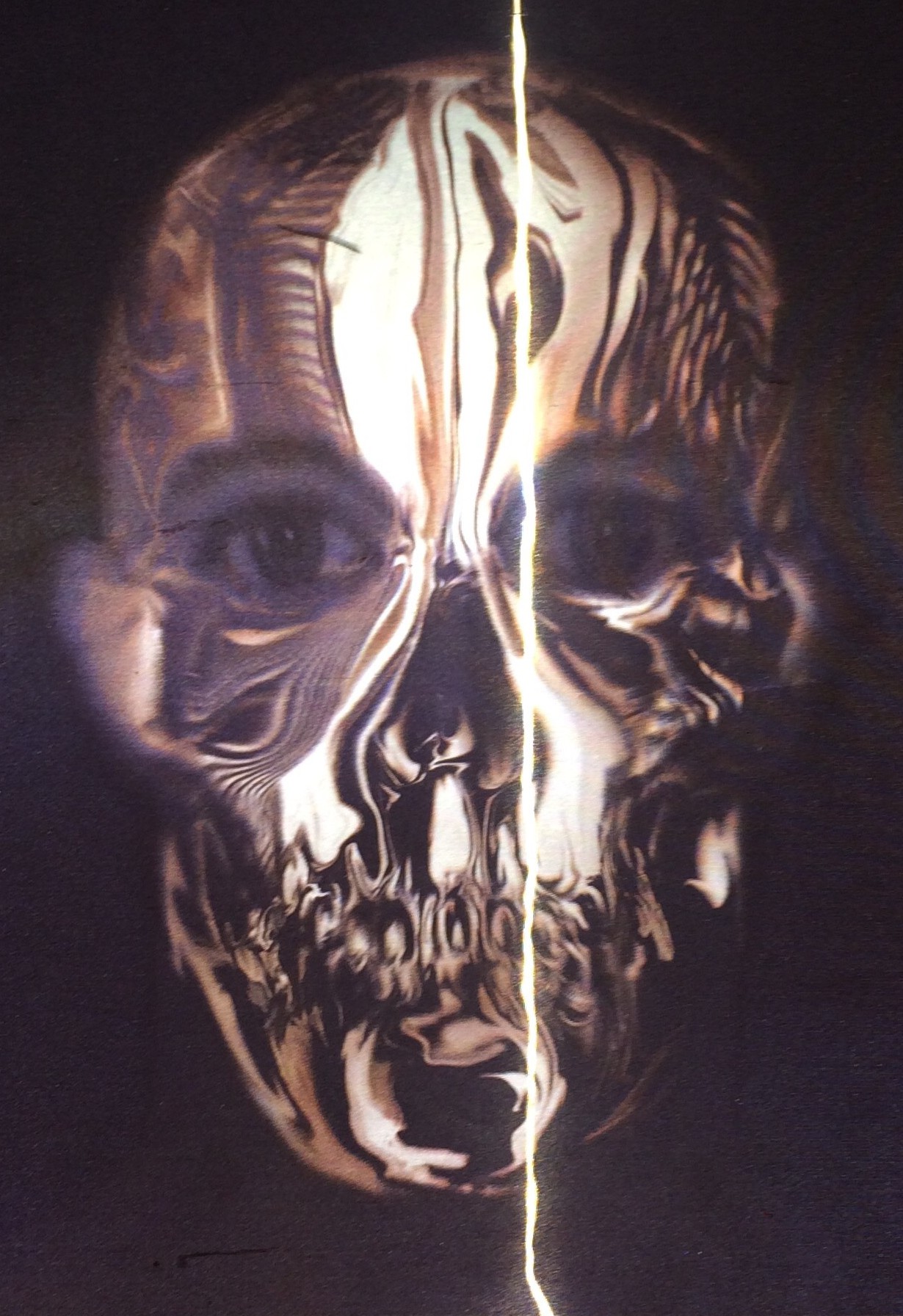 Recently the Alexander McQueen exhibition titled Savage Beauty came to a close. Being prepared as always I had left going to it to the last weekend. So when my friend and I eventually turned up in the afternoon on the last Thursday, it wasn’t really a surprise that the exhibition was sold out. Including the 200 extra tickets they had released for each day of the closing weekend.

The only way we were getting in was if we were members of the V&A… and so,  members we became and I can confirm it was completely worth the money. It was even more fulfilling as the memberships also allowed my friend and I to each bring a plus one. Earlier when we had been in the process of weighing up the pros and cons of such a purchase, we had met two women in the queue who turned out to be very interesting people, (one is a jeweller in Portobello and the other was an artist/illustrator). After buying our tickets and as we were headed towards the exhibition, we bumped into them once more and since they hadn’t been able to buy tickets we offered them to be our plus ones! Side note: random kindness is definitely rewarding as we also learnt so much from them in the process and finished the day off with a good old Byron Burger!

As we waited in line with other avid McQueen fans to enter the exhibition, you could feel the excited anticipation. I couldn’t help but eavesdrop on some of the pretentious to the downright interesting commentaries that some of the attendees had. Never having been an avidly serious fashionista , I didn’t know what to expect or how one was supposed to take in the show or analyse it. But I knew I was about to witness something great.

Overall, the exhibition was well thought out and curated. It was clear that love, thought and care was given to every little detail from the music played in each room  to the way that the items were presented to you.  It was hard to simply walk through. It was hard trying to take everything in as each and every little detail demanded your full attention. Realizing that this was just a small sample of what this man had created was definitely an amazing ( and in a good way) a sensory and visual overload. So much so that I returned to the exhibition the next day as seeing it once would definitely not have done the collection justice in any way.

From the first to the last room, it was clear that there was an evident purposeful artistic journey that had taken place. Now don’t get me wrong I can differentiate my high street from the couture, however, the closest to being a serious fashion person who knows what’s actually going on,  on the runway had been watching a guilty pleasure: America’s Next Top Model.

What the exhibition taught me and clearly demonstrated was that talent definitely exists in every kind of way. Being a law student I have always mainly been academically driven, and at times it’s hard to step out of that mind frame but this exhibition revealed something else to me.That’s not the only way to be something great.

Having seen the exhibition and reflected on it the second time, the pretentious commentary from the previous day didn’t seem as pretentious anymore. I could see that this man, although tortured and having been on this planet for a relatively short time, had in some way lived out his destiny, his talent was clear even to a fashion novice like me. It made me want to find something I was just as passionate about. The sheer creativity displayed throughout was enough to make me jealous and wishing when I write music, poetry or stories I could always be this inspired. I could see he was able to see what no one else could envision and interpret it into a physical form. He somehow managed to express himself and his thoughts and feelings through materials.

Now I know there might be the echoes of ‘but it’s just fashion.’

Enlightened Lorraine would now unanimously say no. It isn’t just fashion. This wasn’t just a collection of rags thrown together. It was clearly a visual documentation of years of hard work, vision and knowledge shown from the historical inspirations behind some of the collections to the study and interpretation of classical art,  literature and nature. It was wearable (in some cases not always comfortable looking) art.
Unless you have seen some of the items in real life, it is hard to explain just how clear it was that a lot of thought had gone into every little detail. The level of care and intricacy was astonishing. Again, it inspired me to find something that I was as passionate about devoting my full attention to ‘perfecting’ or creating in the same way. Not just in terms of my future academic self or career self but to figure out what else I could  do.

What was my calling? Now it may not be something as extravagant or big but I believe we all have that something out there that only we could do well and no one else could because we are passionate about it in our own unique way. Whether that involves being an amazing lawyer, business man or woman to just simply being good with people or creating things that people can appreciate.

I tried to see if I could have come up with something like that and the answer was no. His collection, his life’s work, told a story. It provoked, and in its own way, it was revolutionary once I had learnt the process and the reasoning behind some of it. Through it all I was able to appreciate a new and a different world, so much so that I bought the book (which is probably about the same size as me.)

I could see why he had been THE Alexander McQueen. The clothes spoke for themselves: this was a man who had done what he was born to do and he had kicked ass doing it. 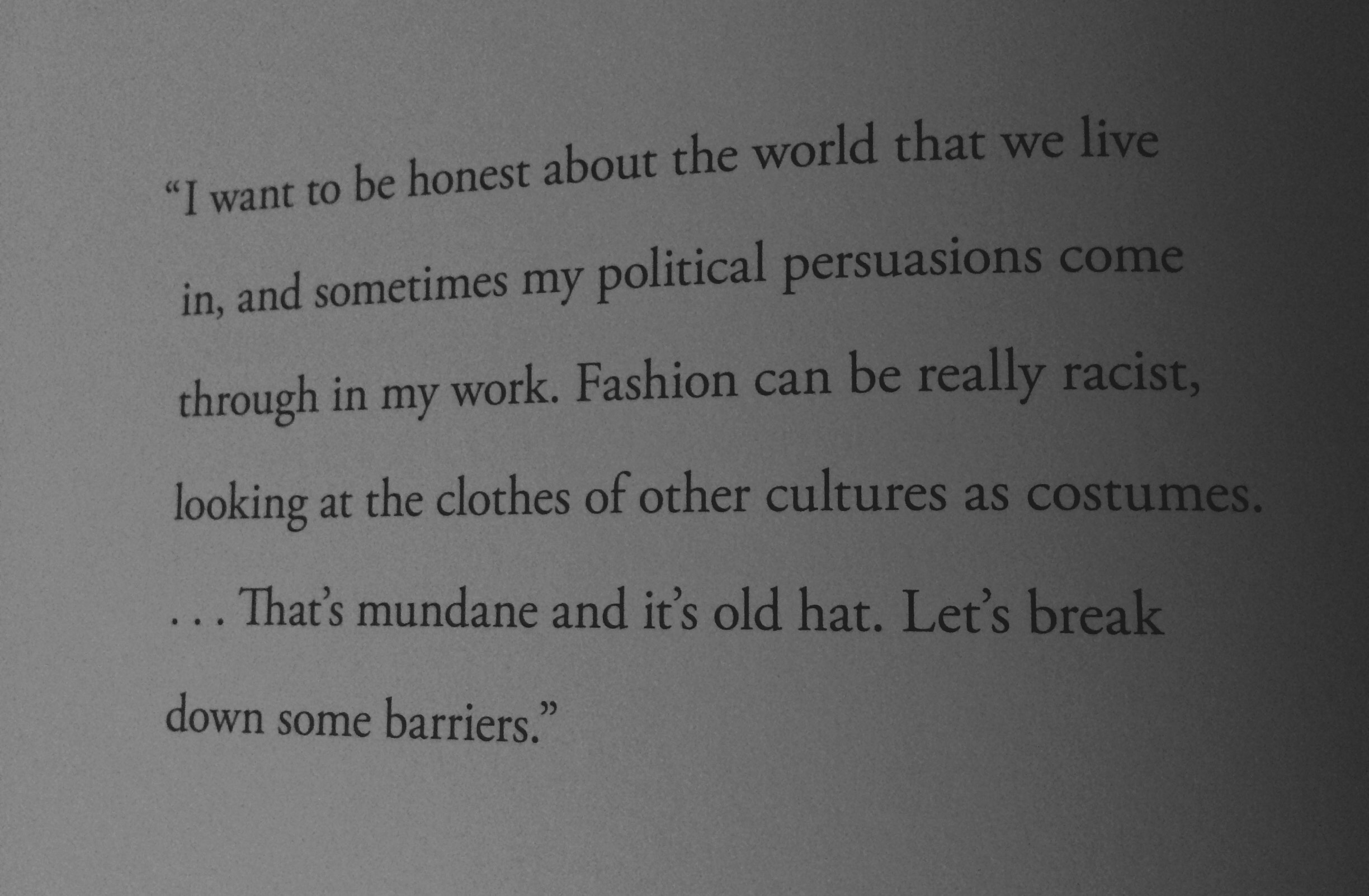 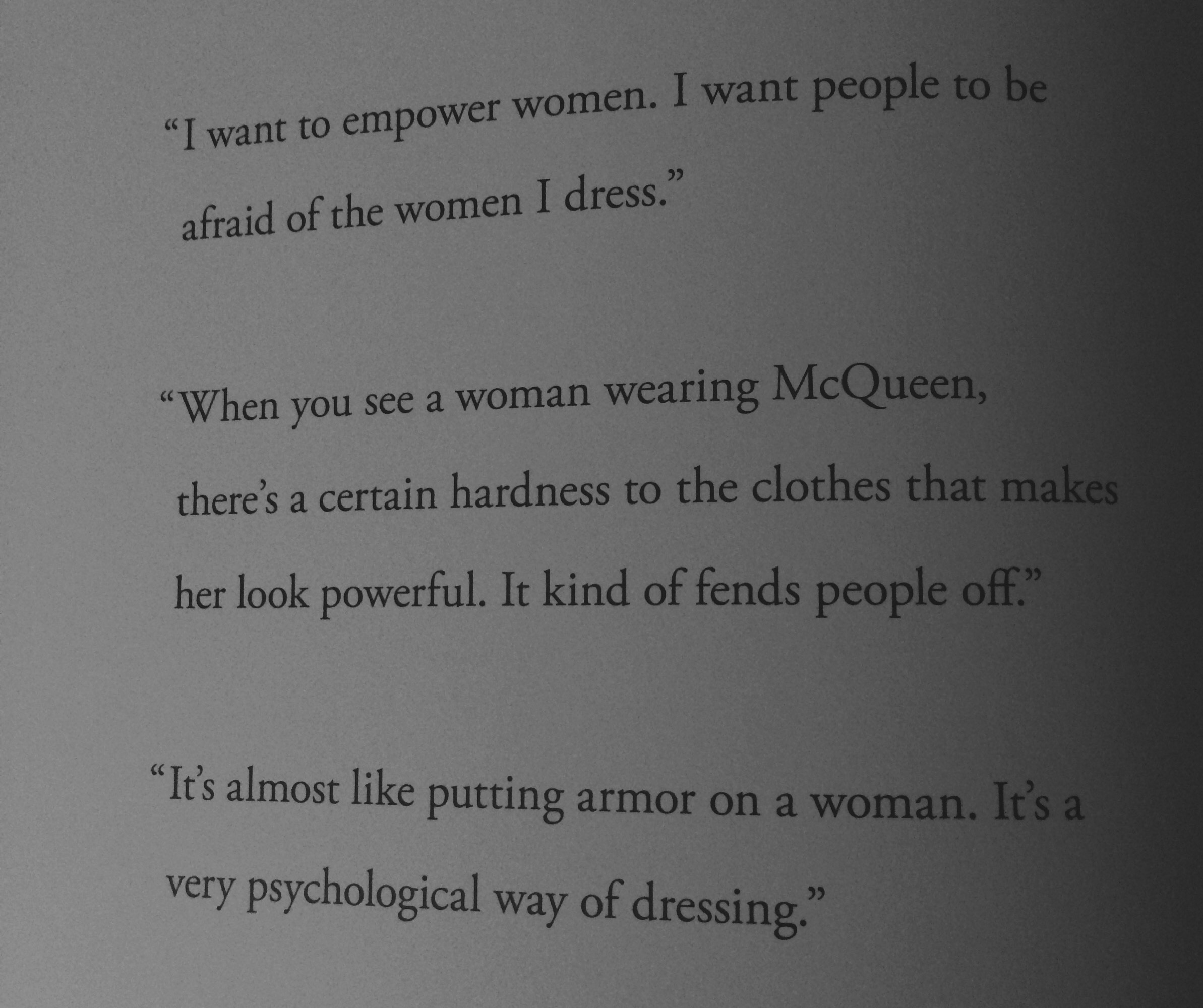