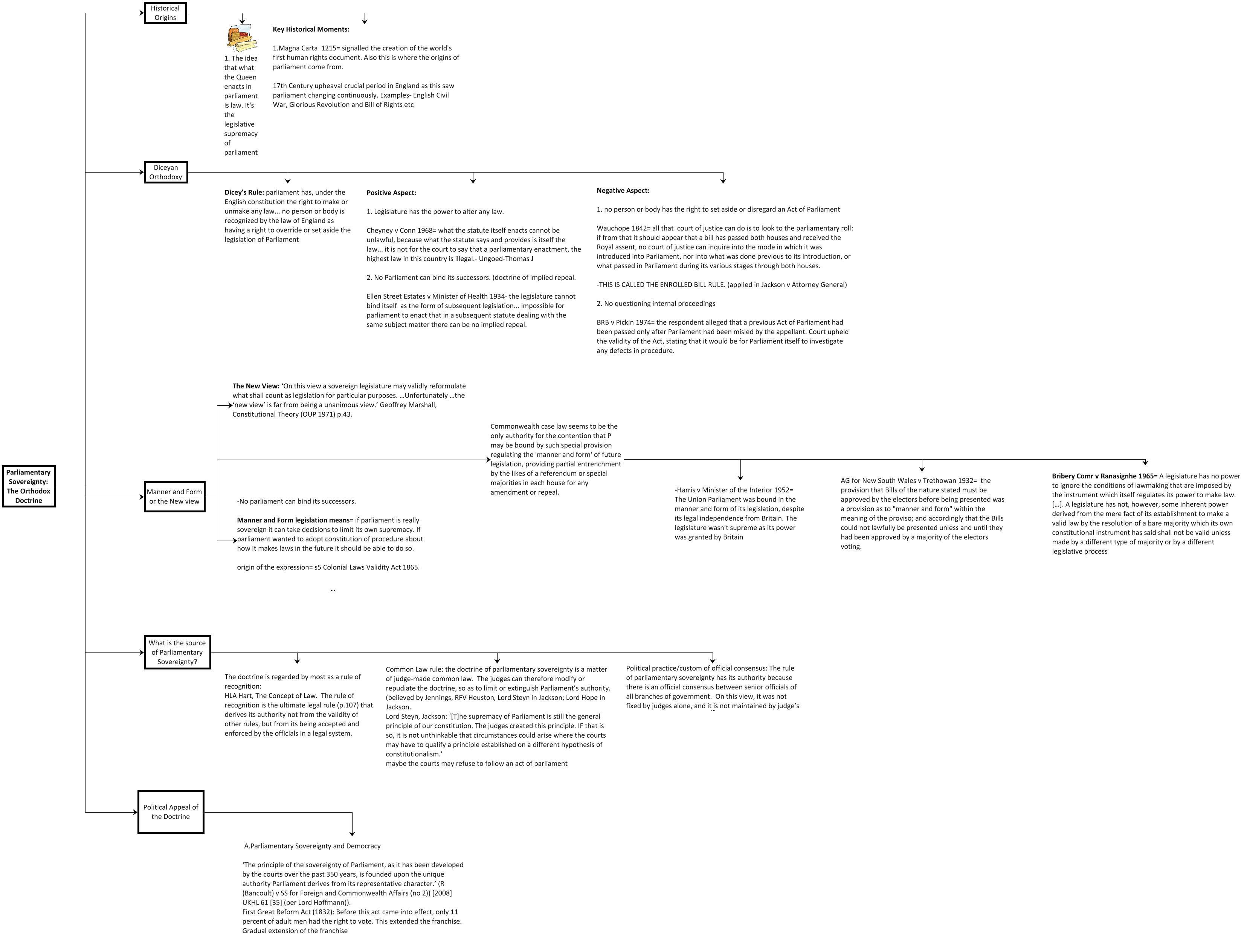 A.   1. The idea that what the Queen enacts in parliament is law. It’s the legislative supremacy of parliament

1.Magna Carta  1215= signalled the creation of the world’s first human rights document. Also this is where the origins of parliament come from.

1. Legislature has the power to alter any law.

2. No Parliament can bind its successors. (doctrine of implied repeal.

1. no person or body has the right to set aside or disregard an Act of Parliament

-THIS IS CALLED THE ENROLLED BILL RULE. (applied in Jackson v Attorney General)

So basically the doctrine of parliamentary supremacy exists because it establishes the supremacy of statute.

III.   Manner and Form or the New view

A.   -No parliament can bind its successors.

B.   Commonwealth case law seems to be the only authority for the contention that P may be bound by such special provision regulating the ‘manner and form’ of future legislation, providing partial entrenchment by the likes of a referendum or special majorities in each house for any amendment or repeal.

L. Hale: [163] ‘What the Commonwealth cases do suggest, however, is the contrary proposition: that if Parliament is required to pass legislation on particular matters in a particular way, then Parliament is not permitted to ignore those requirements when passing legislation on those matters, nor is it permitted to remove or relax those requirements by passing legislation in the ordinary way: see Harris v Minister of the Interior 1952 (2) SA 428 and Bribery Comr v Ranasinghe [1965] AC 172. If the sovereign Parliament can redefine itself downwards, to remove or modify the requirement for the consent of the Upper House, it may very well be that it can also redefine itself upwards, to require a particular parliamentary majority or a popular referendum for particular types of measure. In each case, the courts would be respecting the will of the sovereign Parliament as constituted when that will had been expressed. But that is for another day.’

C.   The New View: ‘On this view a sovereign legislature may validly reformulate what shall count as legislation for particular purposes. …Unfortunately …the ‘new view’ is far from being a unanimous view.’ Geoffrey Marshall, Constitutional Theory (OUP 1971) p.43.

B. Extinguishing or Abandoning Sovereignty

C. The Entrenchment of Legislation/Constitutions

IV.   What is the source of Parliamentary Sovereignty?

A.   The doctrine is regarded by most as a rule of recognition:

HLA Hart, The Concept of Law.  The rule of recognition is the ultimate legal rule (p.107) that derives its authority not from the validity of other rules, but from its being accepted and enforced by the officials in a legal system.

B.   Common Law rule: the doctrine of parliamentary sovereignty is a matter of judge-made common law.  The judges can therefore modify or repudiate the doctrine, so as to limit or extinguish Parliament’s authority.  (believed by Jennings, RFV Heuston, Lord Steyn in Jackson; Lord Hope in Jackson.

Lord Steyn, Jackson: ‘[T]he supremacy of Parliament is still the general principle of our constitution. The judges created this principle. IF that is so, it is not unthinkable that circumstances could arise where the courts may have to qualify a principle established on a different hypothesis of constitutionalism.’

maybe the courts may refuse to follow an act of parliament

C.   Political practice/custom of official consensus: The rule of parliamentary sovereignty has its authority because there is an official consensus between senior officials of all branches of government.  On this view, it was not fixed by judges alone, and it is not maintained by judge’s forbearance. It is a rule recognized by judges, as by others, and a change to it must be a change in the official consensus such that there will be new consensus around a new rule.

V.    Political Appeal of the Doctrine

A.   A.Parliamentary Sovereignty and Democracy

‘The principle of the sovereignty of Parliament, as it has been developed by the courts over the past 350 years, is founded upon the unique authority Parliament derives from its representative character.’ (R (Bancoult) v SS for Foreign and Commonwealth Affairs (no 2)) [2008] UKHL 61 [35] (per Lord Hoffmann)).

First Great Reform Act (1832): Before this act came into effect, only 11 percent of adult men had the right to vote. This extended the franchise.