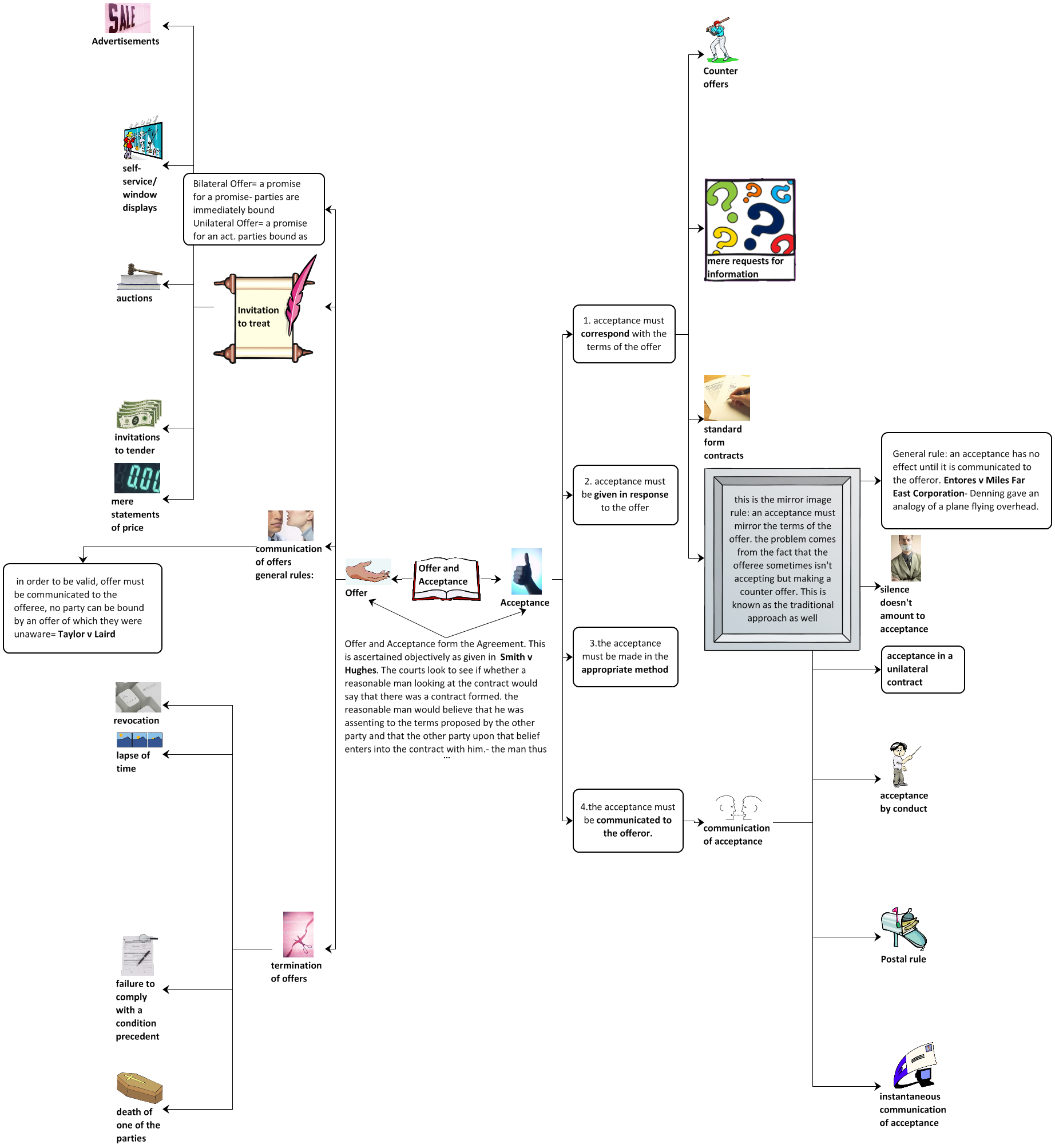 4 ingredients must be present for a contract to be binding.

In order to form a contract there are four elements that have to be present in order for the contract to actually be binding:

The offer and the acceptance form the agreement and the intention to create legal relations and the consideration define whether it’s a binding contract in court. If any of these elements are missing then it cannot be a valid contract.

OFFER= a willingness to contract on specified terms made with the intention that it will be binding as soon as it is accepted.

o   Acceptance in a unilateral contract

o   Where the tender is submitted for specific 2. where a specific quantity if goods are to be supplied over a specified period of time

o   indefinite subject matter such as ‘quantities as you may order’ or ‘as and when required’ thenacceptance of that tender doesn’t result in binding contract at the time.

Once an order is placed then the party who submitted the tender is bound- Great northern Railway v Witham.

o   Where a party merely states the minimum price at which they would be willing to sell= ITT= Harvey v Facey- there had been no offer, Facey’s statement merely a statement of price.

o   Gibson v Manchester City Council= council wrote saying that it ‘may be prepared to sell’. Tenant completed application form but court this was an offer to buy in response to the council’s initial letter which was an ITT

o   Storer v Manchester City Council= court held that the form had specific character that made it an offer rather than ITT, which tenant had accepted by signing and returning it. The form of words used can render it sufficiently precise to be an offer capable of acceptance

o   in order to be valid, offer must be communicated to the offeree, no party can be bound by an offer of which they were unaware= Taylor v Laird

o   true for both unilateral and bilateral offers, offeree must have clear knowledge of the existence of the offer for it to be valid= Inland Revenue Commissioners v Fry

o   Carlill v Carbolic Smoke Ball= unilateral offers can be are made to the world at large and may be accepted by performing the conditions by anyone who had notice of the offer.

TERMINATION OF OFFERS= means the recession, annulling or withdrawal of an offer.

o   Generally the revocation may be made any time prior to acceptance of an offer and it must be communicated to the offeree.

o   Bryne v Van Tienhoven- the offer of 1 October hadn’t been withdrawn at the time it was accepted and therefore the contract was formed on acceptance on 11 Oct- despite the lack of agreement between the parties. Offeror sent revocation on 8 Oct but Offeree only received it on 20 Oct.

o   Hyde v Wrench- possible for an Offeree to reject the offer and terminate it. Counter offer= has the effect of rejecting the offer. The rejection must be communicated.

o   Payne v Cave- in an auction acceptance happens when the auctioneer slams the hammer and a offer can be revoked/withdrawn anytime prior to this point.

o   Qualifications: Routledge v Grant- the issue was if there is a set deadline by which acceptance must be made then are you going to be held to that deadline or can you withdraw? Held- No you’re not held to the deadline, can withdraw at any time up until that period, except where there is a collateral contract e.g Harvela, Blackpool Airplane.

o   revocation made by a third party is valid if:

o   Unilateral offers- accepted by anyone who performs the act stipulate din the contract. In order to revoke, offeror must take reasonable steps to notify those persons who might be likely to accept = Shuey v United States (persuasive precedent)

o   If the offeree has started performance of the act specified then it Can’t revoked even if performance is incomplete.

o   Errington v Errington & Woods= Father bought house with mortgage for son and wife to live in, promised to transfer title as soon as they paid of mortgage. He died, relatives tried to claim title. Court held that contract was unilateral since it involved the act of paying of mortgage for a promise (transfer of title once all payments had been made). Once performance commenced father’s promise couldn’t be revoked. as long as they continued with the payments until paid off the father’s promise would be binding. Denning noted that promise wouldn’t be binding if it was left incomplete and unperformed

o   Offeror may state a specific time or date, if nothing is specified then a reasonable time must pass.

2. Quenerduaine v Cole= this applies to telegrams and similar expedient means of communication such as telex

3. Korbetis v Transgrain Shipping– communication of the acceptance must be done within a reasonable time otherwise the offer will lapse

o   an offer may also terminate if the parties had agree to meet certain conditions and then failed to do so.

o   Death of offeror: their personal representatives may still be bound if=

1. The contract doesn’t involve personal services of the deceased

2. The offeree is ignorant of the offeror’s death= Bradbury and Morgan

o   Death of Offeree: the offer lapses and the offeree’s personal representatives will be unable to accept on behalf of the deceased= Reynolds v Atherton

ACCEPTANCE= a final and unqualified expression of assent to the terms of an offer.

1. ACCEPTANCE MUST CORRESPOND WITH THE TERMS OF THE OFFER

o   This is the mirror image rule: an acceptance must mirror the terms of the offer. The problem comes from the fact that the offeree sometimes isn’t accepting but making a counter offer. This is known as the traditional approach as well

o   Hyde v Wrench= counter offer impliedly rejected the original offer, which had now been destroyed, it was no longer open for Hyde to want to go back and accept it.

o   if a response is made to the offer which doesn’t attempt to vary the terms of the offer. it isn’t a counter offer since it doesn’t reject the terms f the offer. Therefore, it’s still open to acceptance by offeree

o   Stevenson, Jaques & Co v Mclean= a mere request for information is treated differently to a counter offer. in this case it was only a mere inquiry which should’ve been answered and not treated as a rejection of the offer.

o   Problems arise when one or both parties try and rely on pre-prepared contract forms in relation to the general rule that the acceptance must correspond exactly with the offer. The situation which arises where on ot both parties attempt to rely on their standard terms is often referred to as The Battle of the Forms

o   acceptance is usually inferred by conduct and contract is usually concluded on the terms of the last counter offer, this applies to the contract as a whole= Zambia Steel v James Clark

o   the courts mays decide there’s no valid agreement and halt performance of the contract, they are reluctant to do so once performance has started=  British Steel Corporation v Cleveland Bridge and Engineering

o   Butler Machine Tool Co v Ex-Cell-O= radical and unlikely to be followed departure from the strict offer/counter offer analysis was offered by Denning. He suggested:

2. ACCEPTANCE MUST BE GIVEN IN RESPONSE TO THE OFFER

3. THE ACCEPTANCE MUST BE MADE IN THE APPROPRIATE METHOD

4.THE ACCEPTANCE MUST BE COMMUNICATED TO THE OFFEROR.

General rule: an acceptance has no effect until it is communicated to the offeror. Entores v Miles Far East Corporation– Denning gave an analogy of a plane flying overhead.

a)     ACCEPTANCE BY CONDUCT

b)     SILENCE DOESN’T AMOUNT TO ACCEPTANCE

For the rule to apply:

PROBLEMS WITH MODERN FORMS OF COMMUNICATION