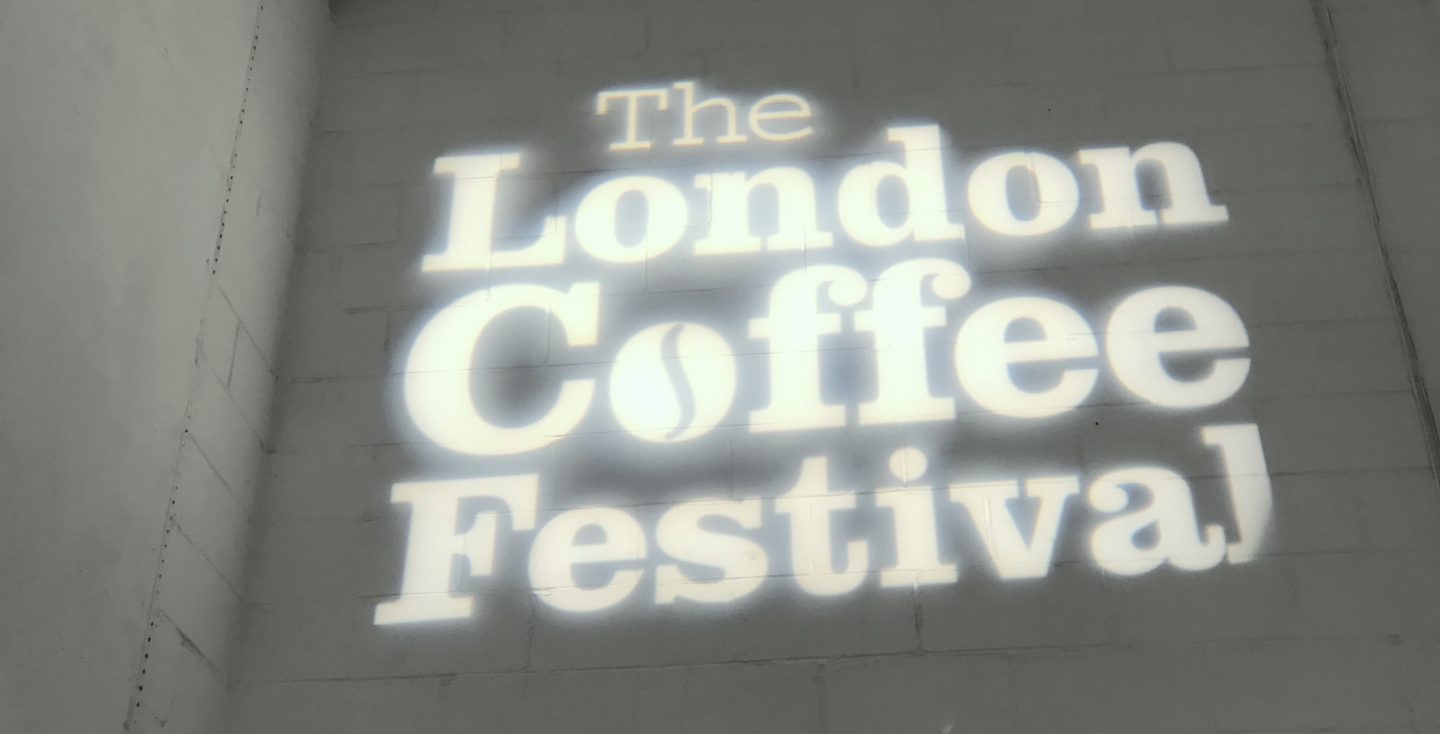 Legend has it, that a herdsman named Kaldi on a sunny day noticed that his trip of goats was more sprightly than usual having grazed on a dark green bush with red berries. The trip was tripping so to speak. Curious, Kaldi tried the red fruits for himself, Bear Grylls style, and he too felt a rush of energy. Upon witnessing this strange behaviour, a curious monk took the berries back to his monastery. There, it was discovered that these red berries were particularly useful for staying awake during the long nights of prayer. The all nighter fuelled by coffee was born. Or so the legend goes.

This weekend, although there were no monks, or goats present (that I know of, unless you count the hipster beards) not only did we get a rare glimpse of blue sky, but it was also the London Coffee Festival 2017!  The event was held at the Old Truman Brewery Brick Lane, with different stalls set over three floors. A festival dedicated to the magical elixir that powered me through many a stressed induced studying sessions and pretty much what holds me together most mornings. 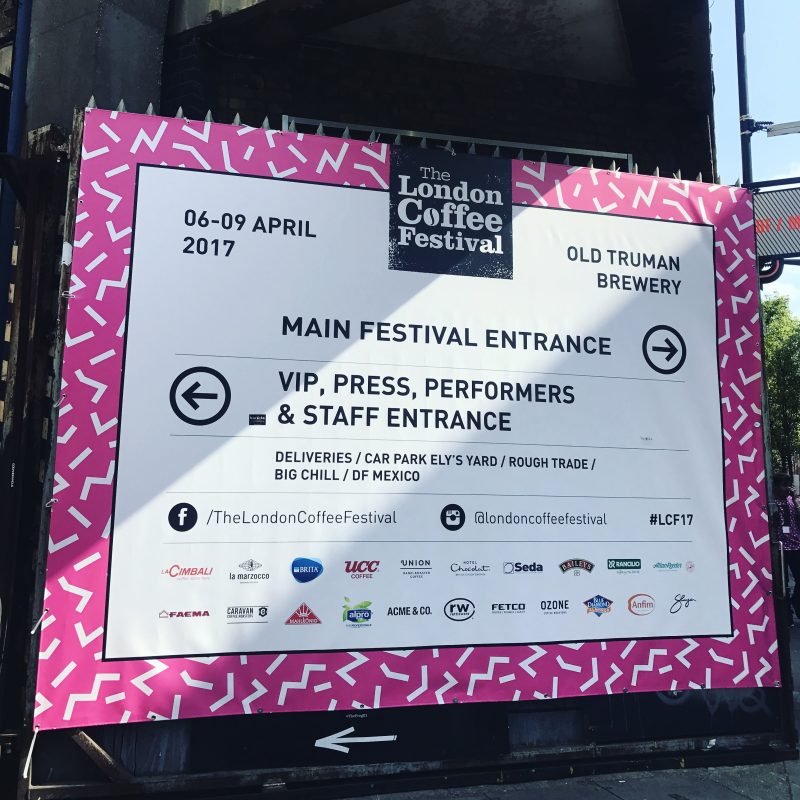 I was able to attend the industry event on Friday 7th April prior to it opening to the general public. Mostly thanks to having made good friends with the baristas that fuelled me through my degree. Not only am I forever in their debt, but I do owe them thanks for teaching me the difference between coffee and COFFEE.

Apart from being sure that I had officially reached peak hipster levels, I wasn’t quite sure what to expect for my first time at the festival. As much as I was tempted to pretend that I was opening up a hip and edgy cafe somewhere in east London adorned with succulents, that served food only on enamelware and used old cassette tapes as coasters or something, it was clear that I was surrounded by experts, no blagging here. Besides, I was more than happy enough to just collect the free samples and take in the surprisingly vast displays of dedication to this magical bean and listen to the expertise and ideas being shared.

To say it was overwhelming would be an understatement. To some, coffee is just dirt water (they are doing it wrong) and to others, it is more than that. All levels of coffee lovers were present; from the pioneers, manufacturers and suppliers of all coffee related paraphernalia, to the roasters, the baristas, coffee drinkers and cafe owners. It wasn’t surprising considering that this is the largest gathering of coffee lovers in western Europe. As a side note, speciality teas, water and juices did also make an appearance, but it was most definitely a coffee event.

Throughout the venue, there were various stalls, activities and immersive workshops taking place such as the live roasting demonstrations held by Union Coffee, Latte Art showcases hosted by various world champions, and The Lab which offered a well rounded programme of demonstrations, talks and debates that guests could interact with.

To bean or not to bean

Personally, I found it interesting that this beverage with such a rich history had gained enough of a cult following to warrant not only a festival but a three day extravaganza where over 30,000 people attended over the same weekend last year. Obviously it’s thanks to millennials and their avocado brunch instas, but clearly also to the dedication of these magicians chasing the God shot (the perfect espresso) and working to build a sustainable industry and profession.

For example, who knew that the future of speciality coffee pods is a contentious issue within the industry- (page 48, Issue 26, Caffeine magazine). That there have been great debates and trade secrets built on what the perfect brew ratios are: the perfect amount of coffee, water and contact time needed to create the perfect cup. Or that plant based milks don’t always foam as well to create those aesthetically pleasing insta worthy latte art that we all appreciate, creating a gap in the market for better alternative milk- there is such a thing as ‘professional milk’.

Like any industry, it seems like coffee is also experiencing a revolution; open to innovation with new tech, techniques and mixtures being concocted to satisfy the best of coffee snobs and dabblers alike.  Complete with its own trends, for example cold-brew coffee is currently the hottest new kid on the block. My favourite variation of this being the Mr Black Cold Press Coffee Liqueur.

Additionally, issues such as whether the profession is inclusive and how it should be defined, or ways it could be more sustainable and ethical are being debated. In a magazine provided in the goodie bag received at the event, it was interesting to see the results of a survey that had been conducted, exploring issues such as whether the moniker ‘hipster’ deserved to be attributed to the industry, or whether technology and the threat of automation would make baristas obsolete and so on.

The Art of Coffee

What struck me the most however, were the parallels to wine 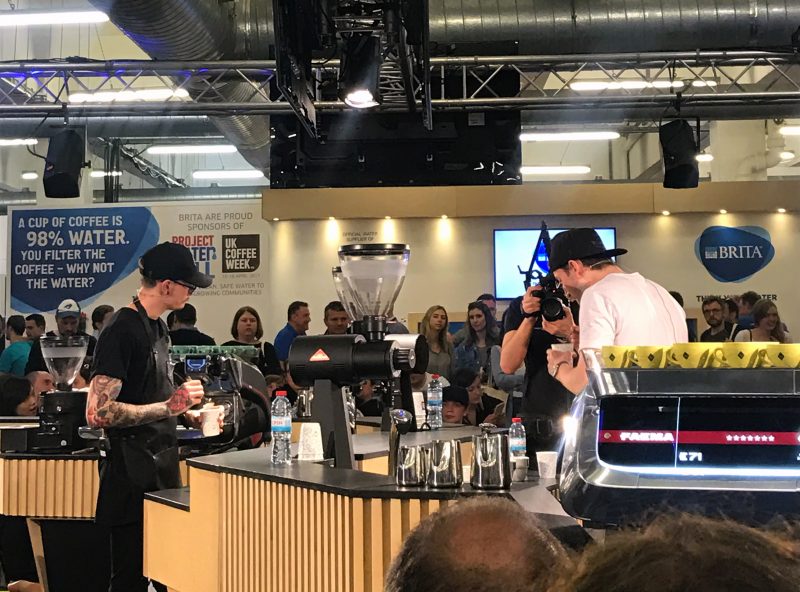 and nowhere was this clearer than in the Coffee Masters competition. Over the weekend, 20 baristas competed for the coveted title and a cool £5,000 prize in a head to head knockout battle format. This year, the crown went to James Wise, having seen one of his rounds, I wasn’t surprised, watching the contestants at work had been impressive.

The challenges involved; blind test tasting different varieties of coffee in order to identify their taste profile, selecting the correct brewing method for a chosen coffee that would maximise its taste and presentation, identifying how it was produced and brewed through the taste test, identifying the fragrance and flavour and so on.

In other events, Grind (also a great brunch place) hosted a pop up restaurant presenting the perfect coffee and food pairings. It is comforting to know that two of my favourite poisons are so similar.

Clearly, the world of coffee is ‘ever-evolving and ever expanding, making it an exciting place to be.’

When my hands weren’t filled with freebies I did try and take some photos, check out the gallery below, and if you were there too let me know what you thought!