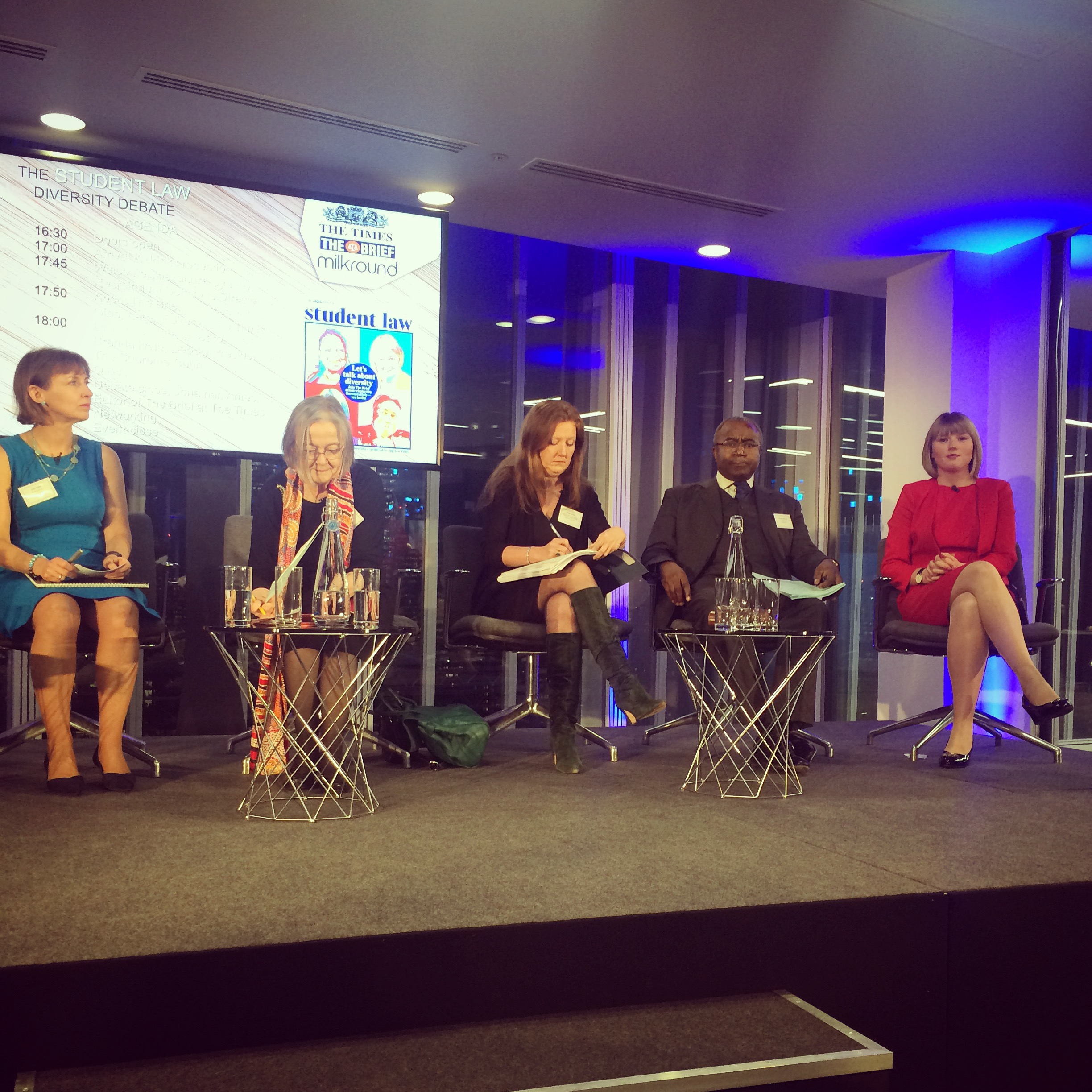 Last night I attended The Student Law Sector debate hosted by Milkround and The Times, and the talk of the night was the issue of D-I-V-E-R-S-I-T-Y!

Let’s be honest, the profession may often seem pale, male and stale if you are someone who doesn’t necessarily come from that background.[1] At times as a “BME” and a woman, it feels like the word is often used as a buzzword when you look at the profession and you don’t necessarily see anyone that reflects or looks like you.

However, after the talk last night I came away with a few things. Firstly, it is clear that although we do have a long way to go, the current players in the legal profession really do care and want to see change happen in the kinds of people that not only have access to the career but also ways of developing and retaining talent. Secondly, the reason why I may sometimes feel out of place, is that there is a lack of awareness and information about various issues that affect the topic such as, the kinds of initiatives that are available and the different paths to a career in law rather than the traditional elite law school route. As exemplified by Millicent Grant’s experience (Deputy President of CILEX) the path to a legal career may not always be straight and simple, but if it is your passion there is always a way.

Baroness Hale, who was the chair of the debate, emphasised that there was a need for the legal profession to take positive steps towards levelling the playing field and remedying the issue of diversity in law. Especially the issue of the proportion of women who are represented in the judiciary.

Susan Bright, a Managing Partner at Hogan Lovells, did recognise that there was a long way to go for the profession and that the issue is a complex one. However, it was important for law firms to continually pinpoint the areas which could be improved upon to level the playing field e.g. retaining female talent in top city firms. Helen Davies QC at Brick Court Chambers also echoed the need for retaining female talent and highlighted some of the ways her chambers had worked to ensure that women could thrive at the bar such as a generous paternal leave, mentoring schemes and tackling the issue of self selection/opting out.

On the other side, Courtney Griffiths QC at Bedford Row, suggested that a way of tackling the issue of access would be to limit the number of institutions that offer the BPTC. He suggested that to even the playing field, more should be done to offer unpaid pupillages, make entry more competitive and to modify the course.

Apparently, two thirds of students will never get a pupillage. At the moment, approximately a thousand students get the BPTC each year, but there are only 400 pupillages. Of the current QC’s 87% are men and 93% are white. The odds are not in our favour. He pointed out that although there are BME’s and women at the Bar, the majority work for publicly funded organisations, and again more should be done to encourage greater representation in the commercial and civil sets.

This was echoed by Helen Davies, that more should be done to encourage a more diverse range of pupils to consider the civil or commercial bar, rather than self-selecting out thinking that it isn’t for them.

Charlotte Proudman, highlighted that there was an anti-woman bias in the law, and it seems true that the vast majority of the laws that govern us everyday are largely written by men. She advocated for a way of more women having a say in the way we construct the law. Her suggestion was the introduction of quotas because for her incremental change has clearly failed. At first I disagreed with her but having talked to her I got what she was conveying with the use of quotas. However, for me I still feel slightly uneasy about using quotas. Personally, I would hate to feel like I have gotten where I have so far because I was filling a space and helping a firm’s diversity targets tick a box: Black, Woman, Foreign …check. It doesn’t feel too good I must say and there still needs to be a balance whilst maintaining the right level of quality candidates.

Nick Turner, Global Diversity Partner at Herbert Smith Freehills, suggested that quotas could create a dangerous dynamic. He presented an alternative which consisted of targets and counting. The difference being that with quotas you are simply box ticking, whereas with counting and targets, it is less of a passive automatic process but you are forcing a conversation to happen thereby driving change by analysing the issue and talking about it.

Quotas or Targets: make it count.

Whether quotas or targets are the way forward, it is clear that there needs to be a change in terms of representation in the law. We live in an ever closer world through the development of technology, Law is a global service, clients, society and the people that need our representation are equally diverse. So why can’t the profession mirror that at all levels?

It is clear that more needs to be done to tackle the issue, but without diminishing the quality of service by just admitting candidates for the sake of diversity. My view is that we need to take the conversation to earlier stages in the chain. For example, more workshops, resources and targeted mentoring schemes for high school and college students etc. It is also important to recognise that the issue of diversity is nuanced, there are many facets that come into play such as social mobility and we should recognise the effect this might have on the chances of someone getting there in the first place.

A few useful reports that I have read on the issue:

The Ashley report, amongst other things, points out than an issue is sometimes recruiters do not understand that the odds are stacked against lawyers from ordinary backgrounds. “The Qualitative evaluation of non-educational barriers to the elite professions” report can be read here: Report Link

And in her report, Funke Abimbola, explores the effect of social class on entering the profession and promotion, suggesting the need for mentorship and highlighting stories from people within the profession: “Funke Abimbola (Oct 2015), “Opening Up or Shutting Out? Social Mobility In The Legal Profession” This visual report can be read here: Report Link

You may also enjoy: