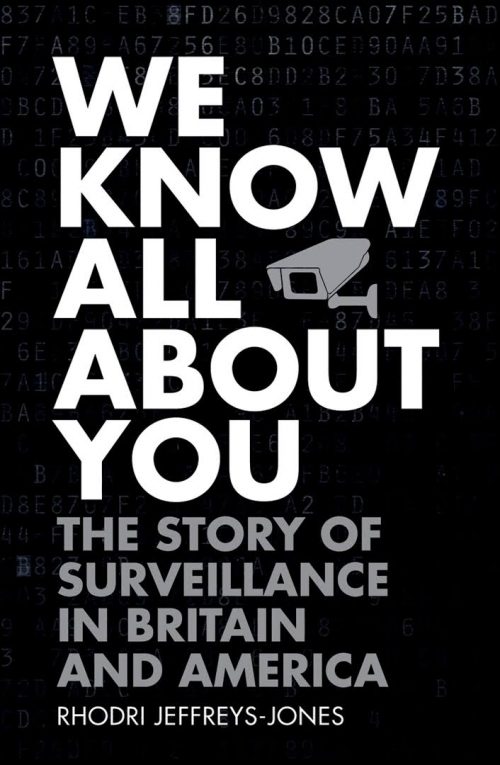 Check out my latest review of  “We Know All About You ” by Rhodri Jeffreys-Jones for The Society of Computers and Law.

It would be easy to think that the mass surveillance of individuals is a fairly modern phenomenon, that has only recently caught the public eye with contemporary technological advancements. Even years after the Snowden revelations, we continue to be exposed to fresh revelations detailing the increasing capabilities of the state, private corporations, and intelligence agencies in keeping their brotherly eye on us.  A recent example comes to mind, “Weeping Angel”. Far from being just a nod to a predatory threat to a certain intergalactic Doctor, it was revealed as the codename of malware that was capable of eavesdropping on consumers through their smart TVs. A chilling example of Orwell’s prophecy many fear is coming truer by the day.

In ‘We Know All About You’, historian and intelligence expert Rhodri Jeffreys-Jones turns the narrative of mass surveillance on its head, and brings to life the often-overlooked origins of surveillance in Britain and America. Far from the genesis of this tale being secret bunkers, remote labs and double crossing agents, Jeffreys-Jones manages to make a convincing and surprising case for the role and influence of private actions in the growth of surveillance of the individual and calls for greater scrutiny.

The account of the central characters and events that have shaped our understanding of the practice of mass surveillance is rich in detail, and Jeffreys-Jones’ descriptions are as precise as they are thought-provoking. The growth and popularity of overzealous private eye agencies, such as Pinkerton’s, and the credit rating agencies of the early 19th century demonstrate the devastating effects of organisations and private entities obsessively collecting intel under the guise of keeping an eye on a ‘troublesome’ workforce.

Expanding on this narrative, Jeffreys-Jones demonstrates how such practices were used to infiltrate industrial unions, in order to collect information on persons of interest who were subsequently placed on blacklists. Such blacklists often had life-changing and harrowing consequences – especially where the information on which they were based was usually inaccurate. We later see how the effects of labour espionage on both sides of the Atlantic influenced the practices of public surveillance, some of which are still in use today.

Disturbingly, we see that the practice of private surveillance was often reliant on citizens playing the role of informant on their fellow man and nowhere is this uncomfortable truth clearer than in the height of the Red Scare. Jeffreys-Jones goes to great lengths to drive one prevailing point home: the inappropriateness of private surveillance consequently informing subsequent public policy following the Cold War (and ultimately the actions of several successive presidents).

In particular, Jeffreys-Jones is somewhat successful in making a case for the fact that private surveillance has historically caused greater harm to individuals, and that it is this, rather than the state spying on us, that represents the real danger of the adverse effects on individuals being surveilled in this day and age. He makes a convincing case, illustrating that the growing dangers of private surveillance are real and tend to be overlooked or subordinated to fears of state surveillance. Rather than the state’s Big Brother, really we should be worried about the Little Brothers and Sisters of the corporations; ultimately, the fears of digital governmental surveillance are overblown.

The author’s tale culminates in an evaluation of the post-Snowden era and of particular interest are the last four chapters where he attempts to evaluate the effectiveness of legislation on both sides of the Atlantic. Especially in the aftermath of 9/11, where the arguments for increased private surveillance have returned with a vengeance as the ‘War on Terror’ continues to shape foreign and domestic policy.

A question comes to mind, how should policymakers effectively balance the interests of the growing issue of surveillance in the name of fighting terrorism, when balanced with the uneasy and indiscriminate practice of mass surveillance of all of our data.  Here, Jeffreys-Jones attempts to review not just surveillance, but the debate about it. Controversially, he advocates a clearer definition of mass surveillance and warns against a focus on the actions of individuals as justification for surveillance. Instead, the focus should be on the policy we implement in preventing terrorism. However, it is here that he falls short and perhaps the tale would have benefitted from an in-depth analysis that offered alternatives, rather than simply condemning the efforts thus far.

‘We Know’ challenges us to re-assess our notions and attitudes towards mass surveillance. Ultimately, Jeffreys-Jones emphasizes that problems arising from private sector surveillance have been particularly neglected. As demonstrated through the hysteria caused by McCarthyism, when surveillance is undertaken by fellow private citizens we are horrified so why are we then not as horrified when we willingly volunteer our data to the new private eye – we have become our own informants.

Lorraine Chimbga is a UCL Law graduate, and currently works for FundApps analysing financial regulation and translating it into algorithms.

Original Link: SCL: Book Review: We Know All About You