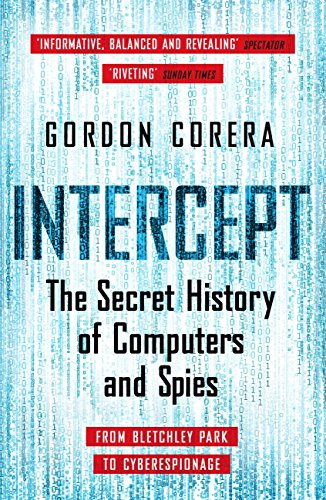 Check out my latest review for The Society of Computers and Law on Intercept by Gordon Corera. Original Link: (http://www.scl.org/site.aspx?i=ed48270)

At first glance, Intercept may not seem of obvious interest to those within the legal profession with its talk of spies and the secret history of computers. That would be a mistake. Although Corera does not direct the book towards the legal profession, his exposition on the evolution of surveillance and its implications is clear enough to draw parallels with the current legal landscape. Corera manages to bring to the fore not only the historical underpinnings driving the development of computers for surveillance, but also the subtleties that aren’t immediately obvious, such as the political, economical and intellectual desires that drove this evolution.

With aptly named chapters, Corera moves you through the history and evolution of spying, computers and the relationship between them. Intercept transports you back in time to the conception of modern espionage during the war, the vehicle that instigated the rise of computers, and then takes you forward to the present time.  Although this book is firmly non-fiction, it is notable that Corera’s flair for writing vividly brings to life the events that have shaped these developments. It is easy to imagine oneself being immersed in the scene, witnessing the evolution of spying, data gathering and analysis and that makes this an easy and interesting read.

Intercept continually shows that history does indeed repeat itself and nothing ever changes. It highlights the fact that the rivalry between the USA and the UK over intelligence is nothing new and grew out of the Second World War. Whilst Britain faced austerity and the wrath of trade unions, the USA forged a path forward and continued to innovate after the war and the Cold War to develop its intelligence systems.

During the Cold War the fear of a Third World War drove both sides to compete with each other to be the first ones who would decode and intercept soviet messages. In the chapter Coming of Age, Corera paints the history of how after the war corporations were at the forefront of developing computers. Intelligence became a business and, as a result, building secure systems was secondary to designing programs that would be the first to market to beat competitors. Security issues were more often than not an afterthought and Corera points out that this is a truth – even today, security costs.

This development also goes a long way to explain the symbiotic relationship between the public and private sector and how it came to be that the state outsources surveillance to private companies whilst being able to benefit from tapping into this. In the 1970s, the dangers of computers and their vulnerabilities were already being highlighted after Anderson’s report and the subsequent tiger teams which were set up to hack into systems on purpose to demonstrate that they were not really secure. The weaknesses of computers, it seems, were the same then, as they are now. Corera points out that, ‘many of the flaws [regarding computer security], that allow an attacker have been known for decades- many since the Anderson Report. But they have not been fixed.’ (p 74)

Spies, espionage and covert interception of communications are perhaps things you would traditionally not expect a lawyer to take particular notice of, but Corera subtly makes it clear why it is important more than ever that as a society we pay attention to our information and who is interested in it.  Intercept comes at an interesting time, when surveillance and the issue of data protection and state surveillance is at the fore. One only needs to look at a few recent examples; the Edward Snowden revelations, the Snooper’s Charter and the debate and legal issues it has raised, or how the recent craze for Pokémon Go has been revealed to be an activity of mass data collection.

After reading Intercept, it is hard to not make the connection and realise that the issue of surveillance, the security of computers and the costs of using devices capable of being tapped are nothing new. This book is essential for anyone wishing to understand the implications of systematically collecting, monitoring and analysing data on a mass scale.

It also encourages us to question the implications of leaving it to the select few to undertake these activities – largely unaccountable to the subjects of surveillance, us. Corera is able to provide a refreshing glance into what is happening in modern society and, as he points out, it is important to question now, more than ever, ‘Not what can you do with technology, but what should you do with technology.’ (p 391) A political question which is too important to be left to the select few, and a question that has far-reaching legal implications.